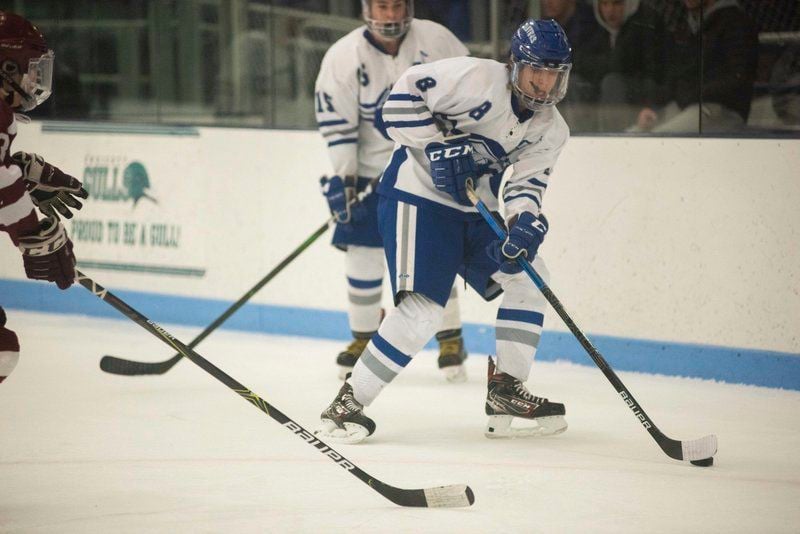 Danvers senior defenseman and team captain Cam DiMeglio takes the puck into the Glouester zone Saturday during his team's 3-3 tie with the Fishermen at Bourque Arena.RYAN MCBRIDE/Staff photo 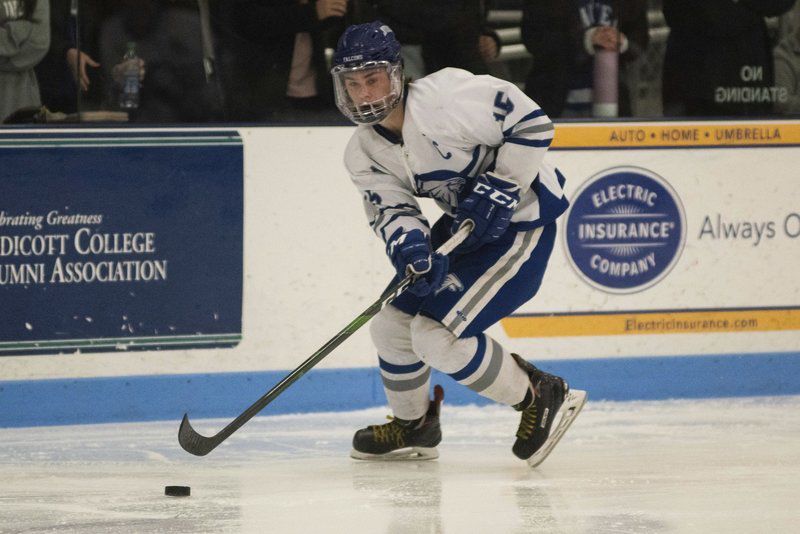 Captain Cal Mansfield, who scored the game-tying goal with 38.4 seconds to play, carries the puck up ice Saturday against Gloucester.RYAN MCBRIDE/Staff photo

Danvers senior defenseman and team captain Cam DiMeglio takes the puck into the Glouester zone Saturday during his team's 3-3 tie with the Fishermen at Bourque Arena.RYAN MCBRIDE/Staff photo

Captain Cal Mansfield, who scored the game-tying goal with 38.4 seconds to play, carries the puck up ice Saturday against Gloucester.RYAN MCBRIDE/Staff photo

BEVERLY — It just wouldn't be a Danvers/Gloucester hockey game if something out of the ordinary didn't happen to affect the final outcome.

In Saturday night's latest go-round between these arch rivals, Gloucester scored three times on 14 shots and never trailed. But the host Falcons, desperately chasing points in an attempt to qualify for the Division 2 North playoffs, tallied thrice over the final period, including twice in the final two minutes, to salvage a 3-3 tie on Senior Night at Bourque Arena.

"It was our best game of the year not just because of the way we came back," said head coach Steve Baldassare, "but also in terms of energy and drive, the guys sticking together, possession pucks and our forechecks.

"We had trouble burying the puck against a great goaltender (Gloucester's Connor Vittands) for two periods, but stayed with it and finally got the results we wanted."

Down 2-0 leading into the third period, Danvers got on the board when sophomore right wing James Carmilia swatted home a one-timer from the low slot with his team on a 5-on-3 power play.

With exactly two minutes to go, Baldassare tied the game by burying a pass from Mansfield past Vittands to the goaltender's right.

On the very next shift, however, Gloucester got the lead back when freshman Jack Delaney took a feed from captain E.J. Field, got past the Falcons' defense and roofed a high shot into the cage with 1:18 to play.

"It's a shame, because that should've been the game-winner," Gloucester (9-5-3) head coach Derek Geary said.

But the dramatics didn't end there. With goaltender Adam Bridgeo pulled for an extra skater, the Blue-and-White got the equalizer with 38.4 seconds remaining as Mansfield picked a rebound off of Vittands' pads and re-deposited it into the Fishermen's net. Baldassare took the initial shot, with captain Tyler Puska also assisting on the play.

"We cleared the puck and it went off our guy's shin pad, one of those pinball-type things," said Geary. "You can't clear the zone there, and inevitably it ends up in the back of your net."

Vittands was busy for much of the night, finishing with 26 saves. Danvers netminder Adam Bridgeo, back after missing the last few games due to illness, stopped 11 of 14 shots.

"He had some huge stops in that second period," Baldassare said of his junior goalie.

After his team managed just a single shot on net in the opening stanza, Costanzo gave his team a 2-0 edge after two frames with a pair of snipes. First, he one-timed a Field pass from the low slot past Bridgeo at 5:20 for a 1-0 lead. With 40 seconds to go before the second intermission, he flew down the right wing and cut towards the middle of the ice before ripping a shot that went off of Bridgeo's glove before going up and over the netminder and into the net.

"We were able to bury the chances that we had," said Geary.

"We're trying to play the best hockey we can, but this time of year is a grind. The first week of February is ridiculously tough; we played the two hardest teams in the NEC (including Marblehead), plus you have the players coming off of exams, sickness, you name it. It's the same for all teams, obviously, but it's by no means easy."

Baldassare, whose team had 10 shots in both the first and second periods and nine in the third, was pleased with the play of both Carmilia and junior winger Tyler Robinson, Danvers plays three road games to end the season: at Swampscott Wednesday, at Winthrop Saturday and the Cape Ann League champions from Masconomet on President's Day at the Essex Sports Center.