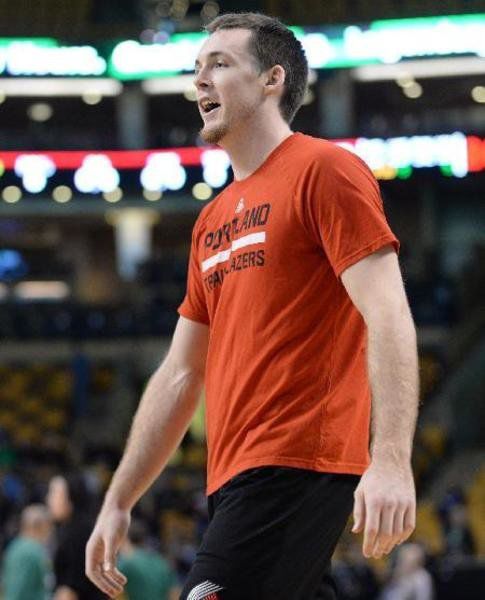 After a stellar career at both St. John's Prep and Notre Dame, Pat Connaughton's first season in the NBA as a rookie with the Portland Trail Blazers was one of watching and learning the nuances of the pro game. Staff file photo/Paul Bilodeau 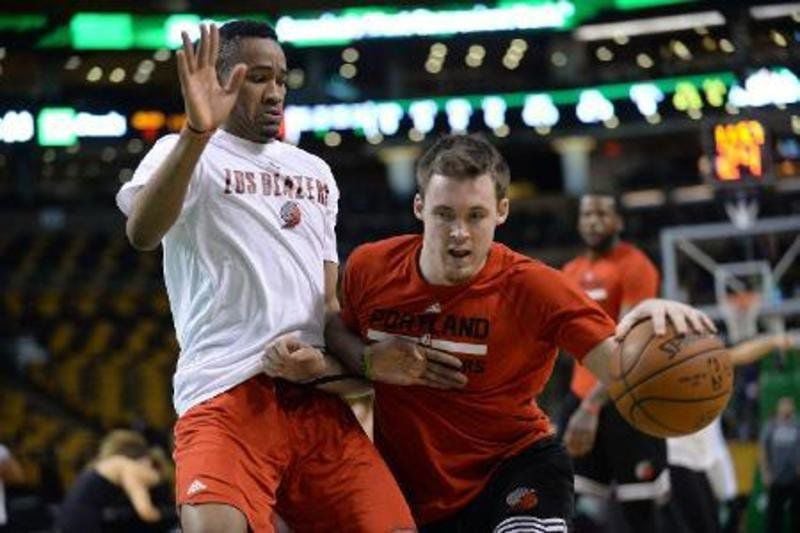 Pat Connaughton, shown here driving on a teammate during pre-game drills in Boston this past winter, will be looking for improvement in his second NBA season with the Portland Trail Blazers next season. Staff file photo/Paul Bilodeau

After a stellar career at both St. John's Prep and Notre Dame, Pat Connaughton's first season in the NBA as a rookie with the Portland Trail Blazers was one of watching and learning the nuances of the pro game. Staff file photo/Paul Bilodeau

Pat Connaughton, shown here driving on a teammate during pre-game drills in Boston this past winter, will be looking for improvement in his second NBA season with the Portland Trail Blazers next season. Staff file photo/Paul Bilodeau

Pat Connaughton would probably laugh if you called him the Cal Ripken of the Notre Dame basketball program. But in the context of what he did in his career there, it’s perfectly appropriate.

The former St. John’s Prep star established himself as the all-time leader in games played for the Fighting Irish (139), including 120 consecutive starts. He was a rare two-time captain at ND, averaged double figures in scoring (10.5), played in multiple NCAA tournaments and, as a senior in 2015, helped his team come within a few seconds of making it to the Final Four for the first time in 37 years.

When you’re building that kind of portfolio at the college level, including a four-year stint with the baseball team too, the ironman tag becomes part of your legacy.

Yet in his rookie season with the NBA’s Portland Trail Blazers, Connaughton suited up 93 times, which was the equivalent of playing three seasons for the Fighting Irish. The difference from his starring role at St. John’s Prep and Notre Dame is that he played sparingly off the bench for the Blazers, appearing in 34 games and averaging just 1.1 points.

Sitting on the bench for an overachieving Portland team (44-38, plus a first round playy exit vs. the L.A. Clippers) wasn’t a shock to Connaughton’s system. It’s a way of life for a lot of NBA rookies, especially those taken in the second round of the draft like he was (No. 41 overall). The 6-foot-5 guard didn’t brood or complain; in fact, it didn’t affect his work ethic at all.

“It was still a grind,” said Connaughton, 23, who’ll be at the Danvers Indoor Sports complex to conduct a basketball camp for grades 4-12 from June 27-30 to benefit With Us, a charitable foundation that he launched in the past year.

“To be honest with you, sometimes it’s as much work for the guys who don’t play as for the guys who play. For guys in my situation, you have to make sure you do full workouts, full (weightlifting), and you need to get to get to the games early to play (usually 2-on-2 games). You rarely take a day off from doing that stuff and I just did it all the time, because you always have to be ready. And in my first year, I think I learned a lot from Damian (Lillard, 25.1 ppg.) and C.J. (McCollum, 20.8 ppg), two of the best guards in the league.”

Connaughton had his finest moments of the season against the Celtics at the Garden (7 points) and against the defending champion Golden State Warriors (another 7-point effort). He had no illusions about cracking the starting lineup right away, not with all the young talent that coach Terry Stott already had at his disposal. It was going to be a gradual process for Connaughton and he was fine with that. He felt all along that he was a novice in the ways of the NBA, and that he had to reacquaint himself with some of the skills that made him a pro prospect in the first place.

“At Notre Dame, they were able to use my versatility,” said Connaughton, one of only eight Fighting Irish players in history to finish with more than 1,400 points and 800 rebounds. “That was great and we had team success, but I kind of needed the year that I had in the NBA. I needed to get more athletic, to get quicker, to get more familiar with what it takes to play in the NBA on offense and defense.

“The things that I used to do in high school at the Prep are some of the things I have to get back to doing,” added Connaughton. “The NBA is such a great offensive league, and I have to be able to do the things I’m called on to do. I have to be good with the ball, handle it better, and I have to make good decisions and be a playmaker. Those are kind of (individual) things that I need to get back to. I’ll always be a good teammate and a locker room guy, but I need those other things, too.”

It’s going to be an important off season and training camp for Connaughton, who is the second year of a three-year contract with Portland. The final year of the deal is not guaranteed, so there is already speculation that if he doesn’t step it up this season, he could be done with basketball and switch over to baseball since the Baltimore Orioles — who drafted him as a pitcher in the fourth round of the 2014 draft — would love to have him back. That speculation, of course, is media driven and not coming from the two-sport standout himself.

“I still have a lot of confidence (in an NBA future),” said Connaughton. “I’m not looking at next season as a pressure year or a pivotal one or anything like that. Guys can improve a lot in a year. I look at what (teammate) Allen Crabbe did between his second and third year (Crabbe led the Blazers in field goal percentage and averaged 10.5 ppg), and it was great.

"For sure, I want to play more and contribute more. I’d like to crack the rotation. You don't want to be shooting for the all-star game at this point, but playing more is a realistic building block."