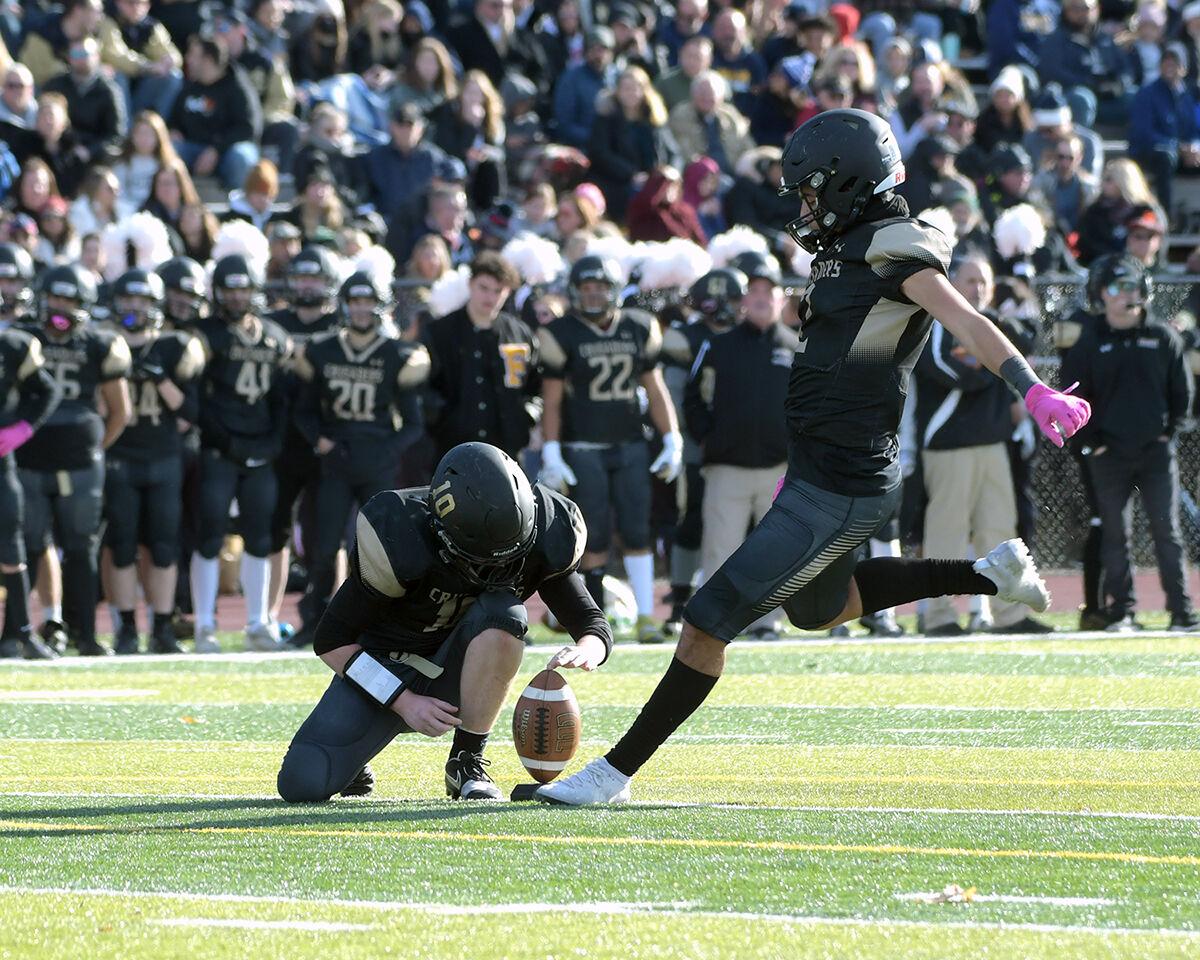 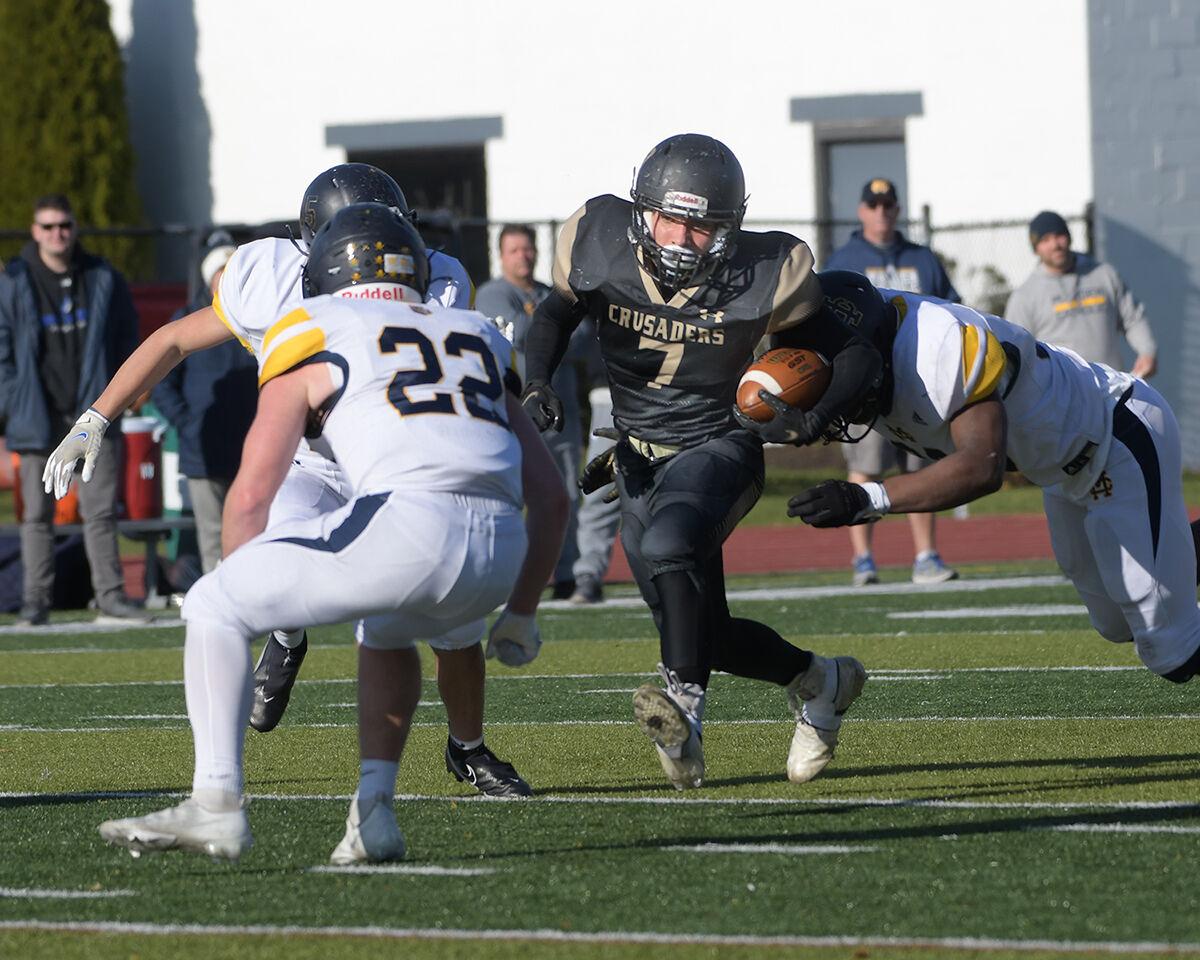 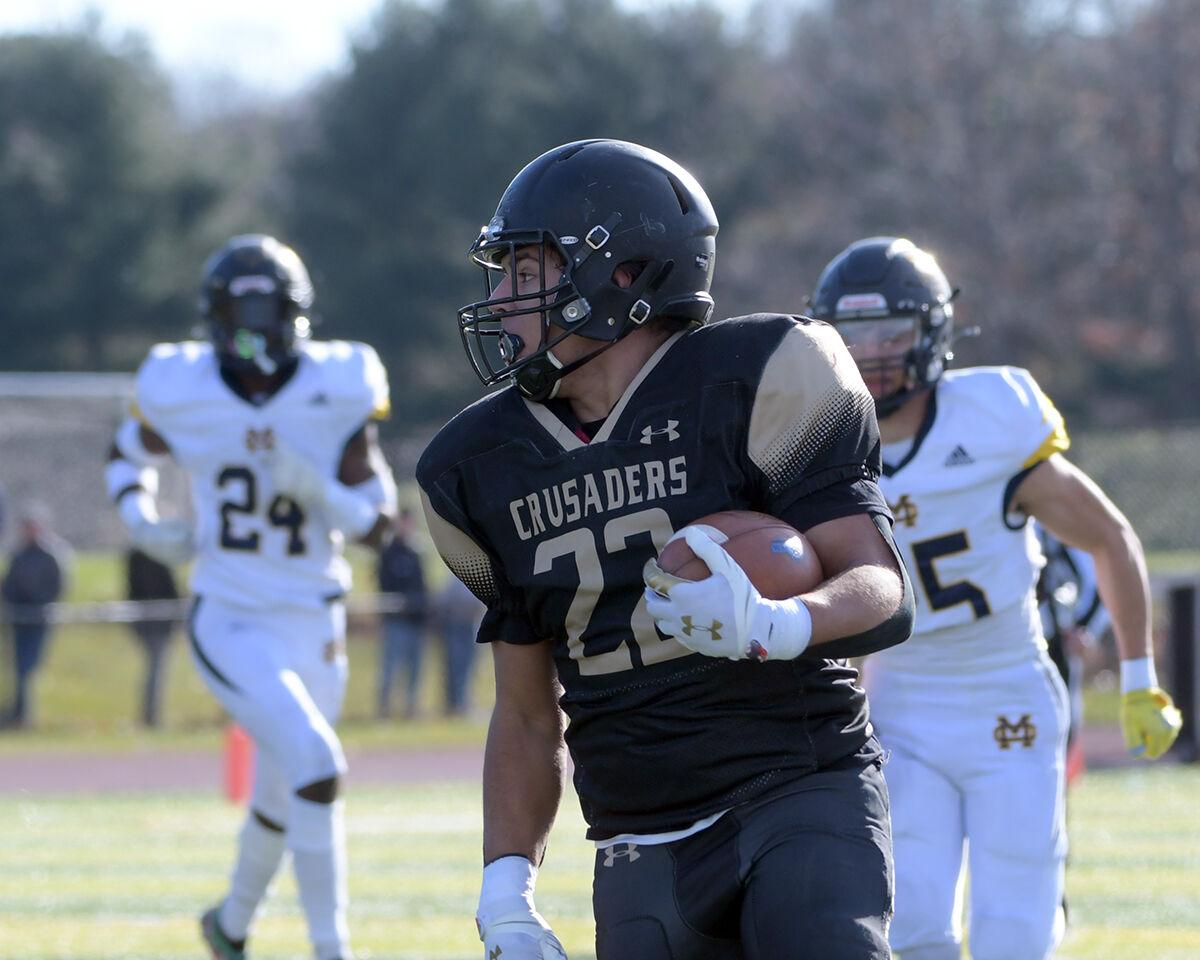 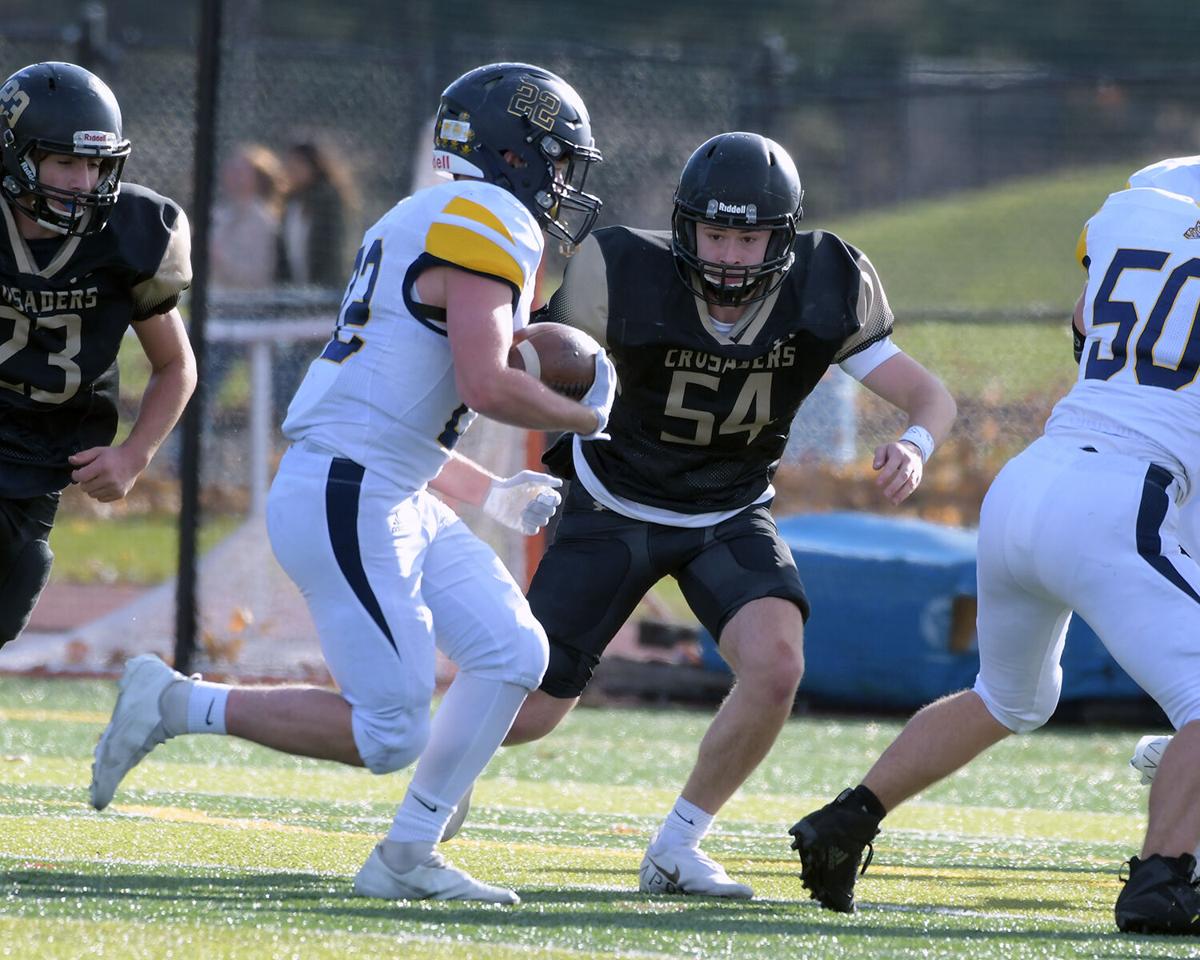 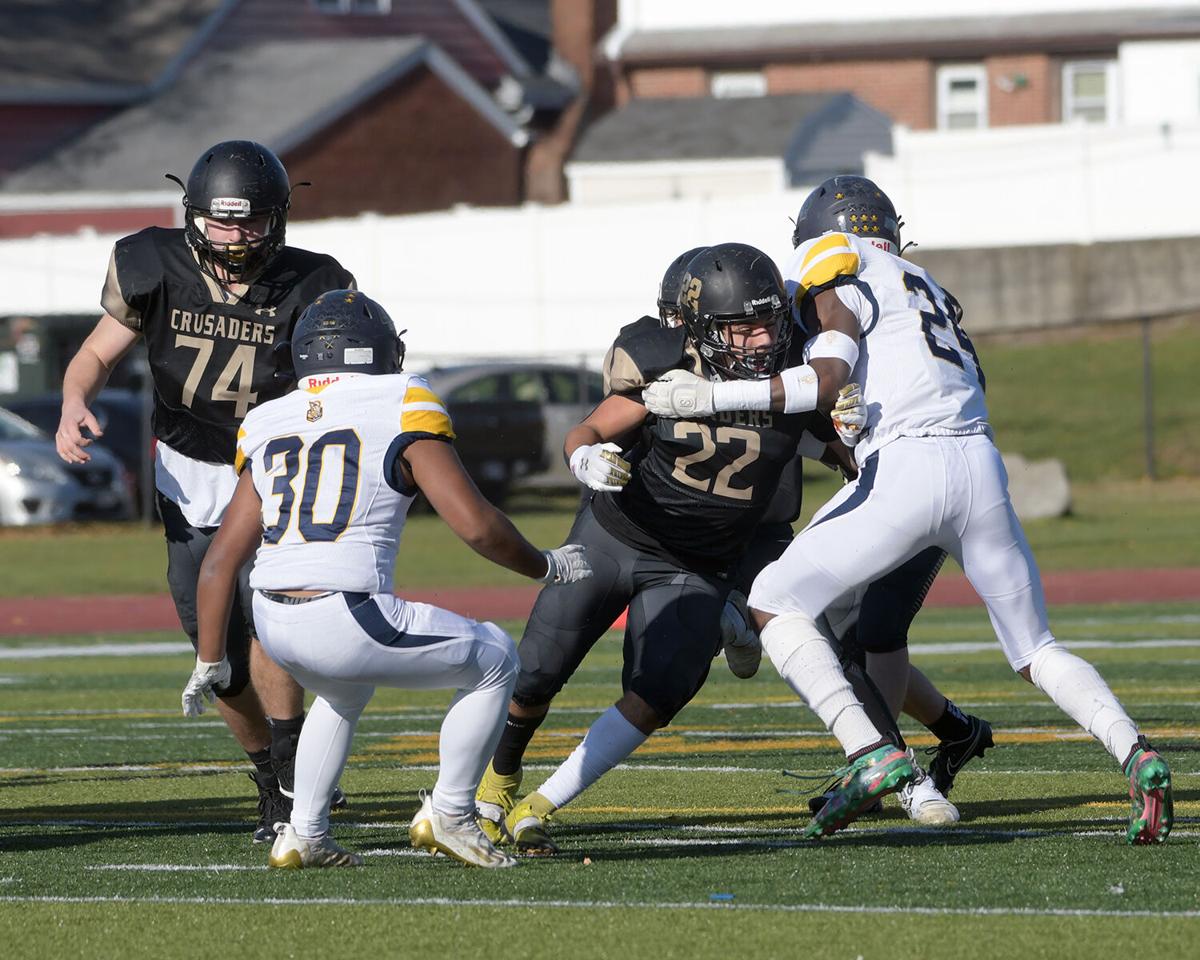 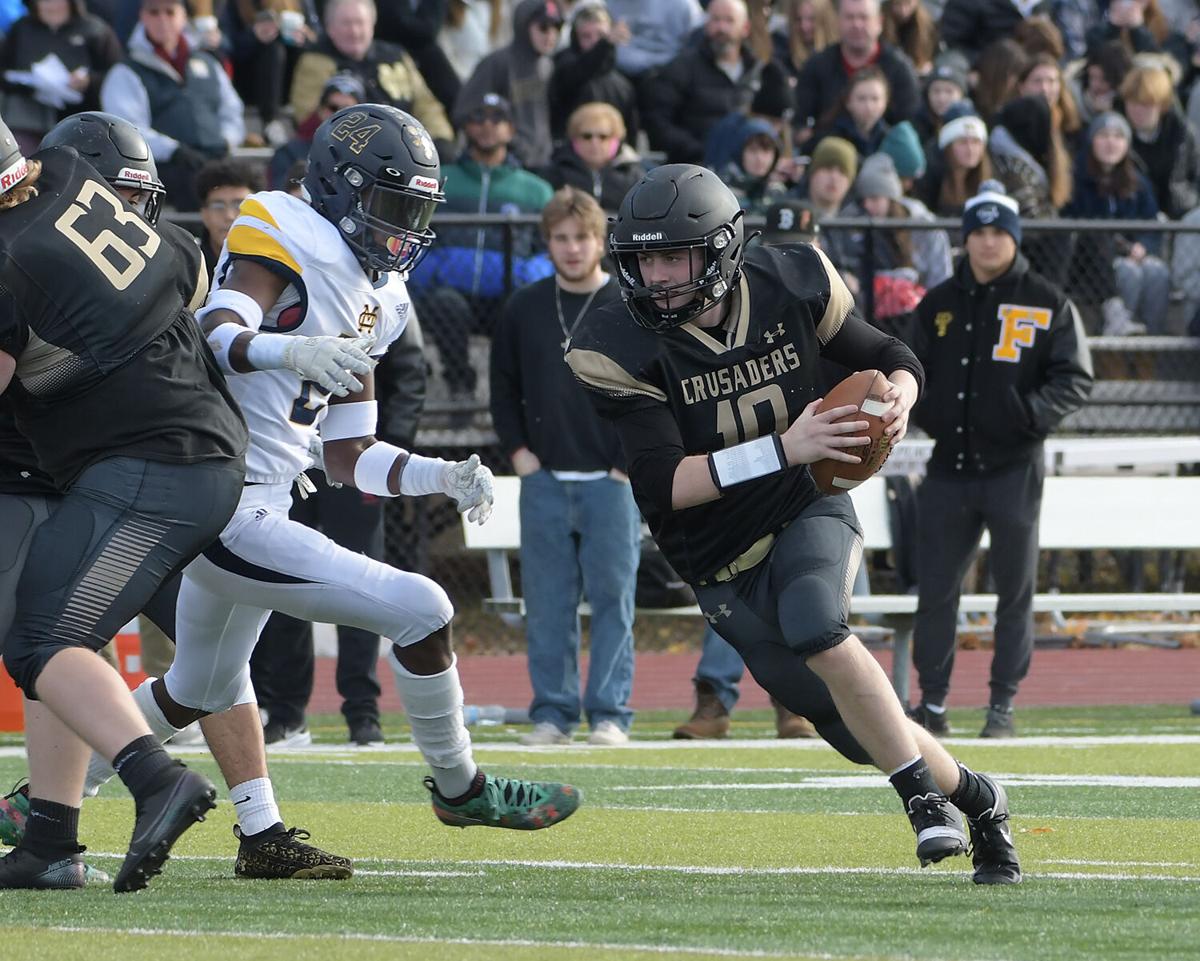 Fenwick QB Steven Woods had a stellar game to lead his team to a Thanksgiving win over Malden Catholic. 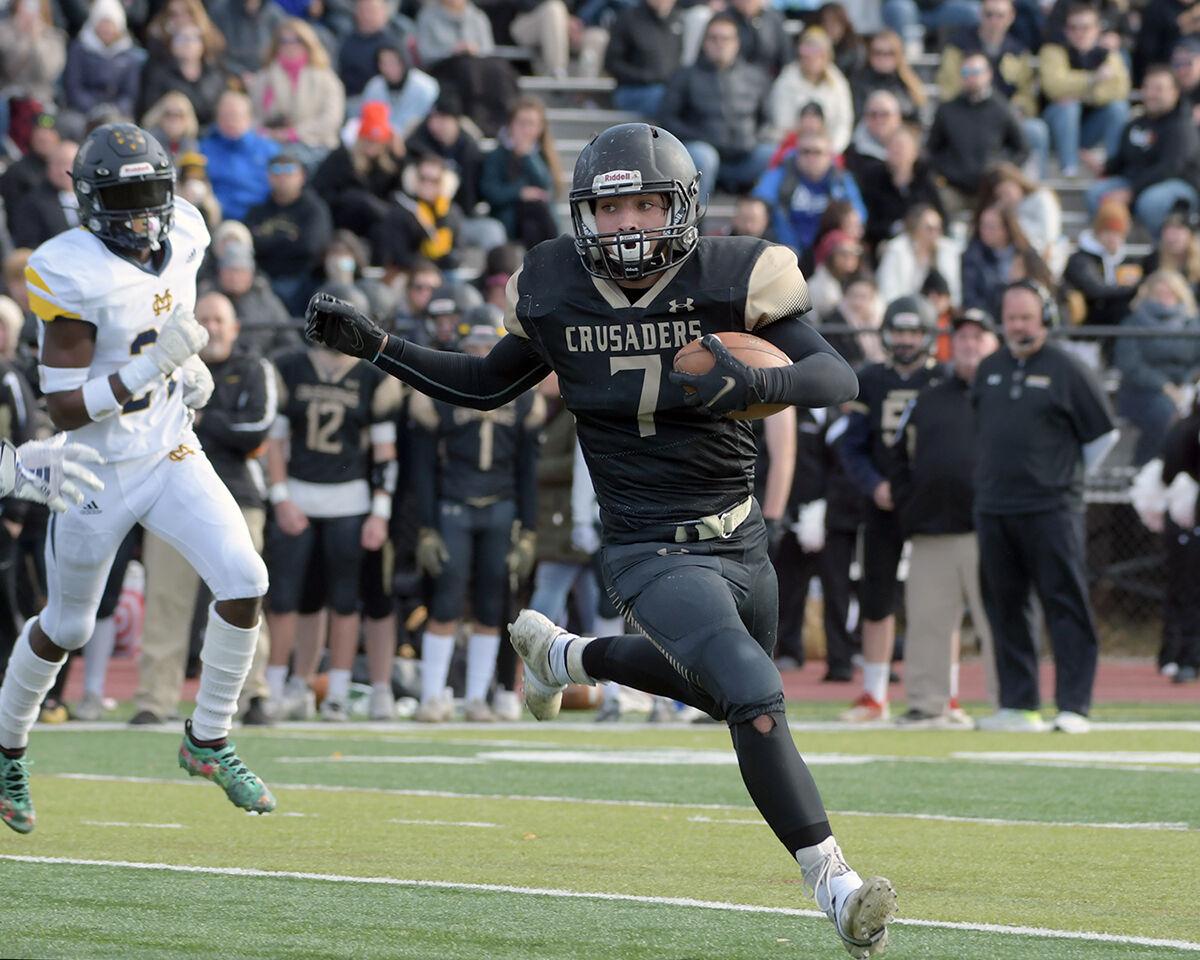 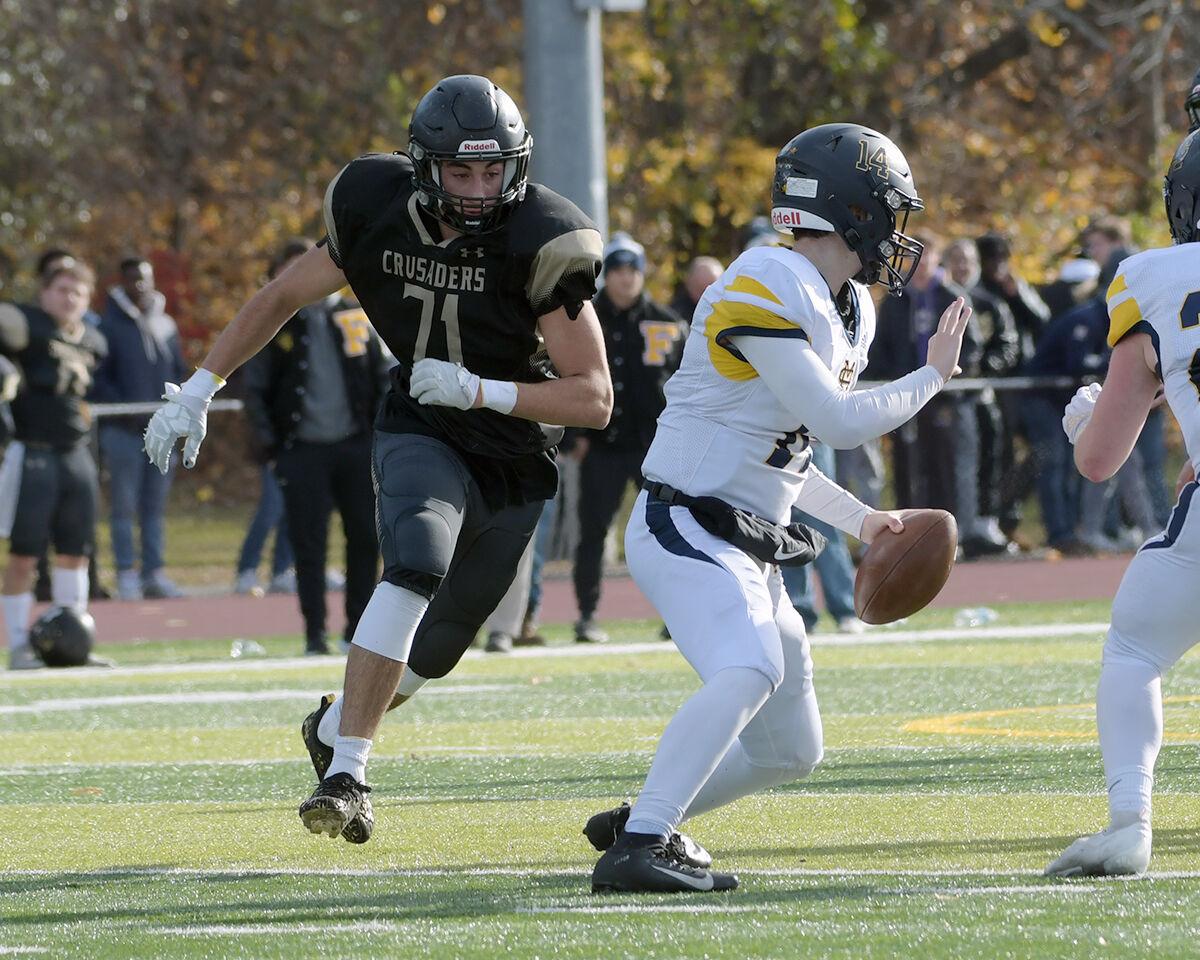 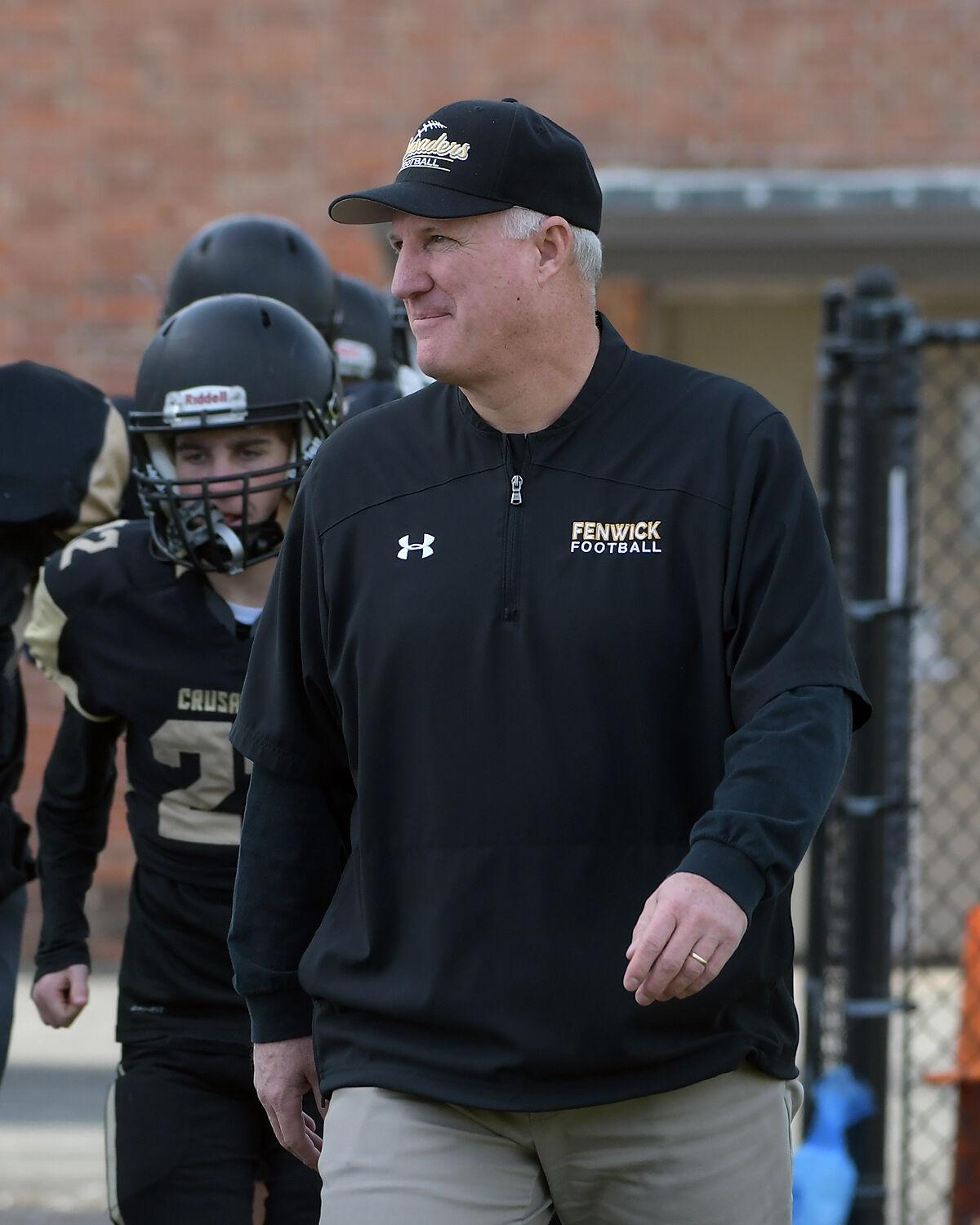 Fenwick head coach Dave Woods led his team to a 9-3 season with a victory over Malden Catholic on Thanksgiving. Rose Raymond photo 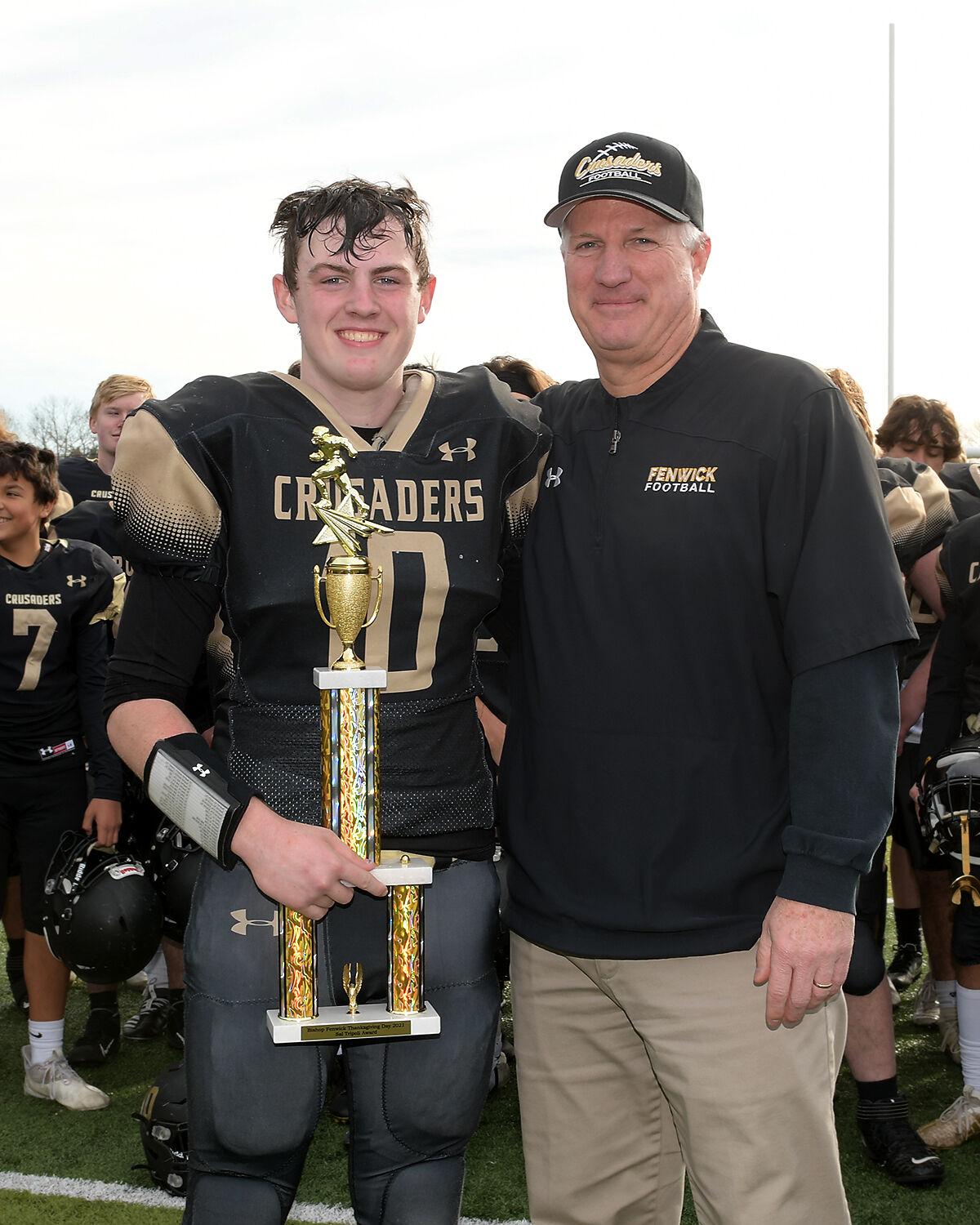 Fenwick QB Steven Woods had a stellar game to lead his team to a Thanksgiving win over Malden Catholic.

Fenwick head coach Dave Woods led his team to a 9-3 season with a victory over Malden Catholic on Thanksgiving. Rose Raymond photo

PEABODY — It would have been easy for Bishop Fenwick’s football team to pack it in after suffering a disappointing loss six days ago in the Division 5 semifinals, but instead the Crusaders came fired up to play Division 1 Malden Catholic at Donaldson Stadium on Thanksgiving morning.

Both offense and defense clicked in the 35-23 victory that was much more lopsided than the final score would indicate because the Lancers scored twice in the final minutes of the game.

“It’s been an unbelievable season,’ said Fenwick coach Dave Woods, whose club finished 9-3. “This was a hard fought win, and our coaches designed some new plays with a few wrinkles. Every time we ran one it worked.

“I can’t say enough about Jacob Vargus, who was all over the place on defense (tackle). Chris Faraca rolled his ankle on the first series, and played the rest of the way with one good leg. Steven (Woods) had another strong game, and Jason Romans was unbelievable. All the kids played their hearts out, and I am so proud of them. What they did this season is really something special.”

Woods completed 13-of-16 passes for 231 yards and four touchdowns. He finished the season with 30 TD throws (a Fenwick single season record) and went over the 2,000 yard mark (2,082). His favorite target was Romans, who caught five for 76 yards and three TD’s which put him over a thousand yards receiving (1,029) and gave him a Fenwick record 18 TD’s in a single season (the record previously set by Mike Cranney in ‘88).

After a scoreless initial 12 minutes with both teams reaching the red zone, but unable to finish, the Crusaders put 21 points on the board in the second to take command. Romans, who did just about everything for his team, intercepted a Will Perry pass to set up the first score, and two plays later caught a 12-yard pass from Woods. Romans threw to Thomas Swanton for the two point conversion and an 8-0 lead.

It didn’t take long for Fenwick to increase the lead to 14-0 after a fumble by MC was recovered by the Crusaders near midfield. Woods tossed a 3-yard pass to Chris Faraca, who barreled into the end zone. BF scored on five straight possessions in the second and early third quarters to blow the game wide open, 35-7.

“This was fun,” said senior captain and quarterback Woods, who received the Sal Tripoli Memorial MVP trophy, presented by Sal’s dad Mike. “We drew up plays in practice and executed them well.”

After the Lancers got on the board on a Perry 21-yard pass to Dom Wadland, the Crusaders struck again after a long run by captain Costa Beechin set them up in excellent field position. Fenwick worked the hook and ladder with Faraca getting the ball to Woods, who fired a 21-yard TD pass to Romans with seconds left in the half.

“We drew up some plays in practice, and that hook and ladder worked so well right from the first try,” said the quarterback. “We felt confident running it and executed well. This is a really dedicated group that didn’t give up even after we had that disappointing loss (to Swampscott). I’m proud of all these guys and it shows a lot by how hard we fought right to the end.”

It was more of the same in the second half. On the opening drive of the third quarter it took only four plays to tack on seven more points on a Woods to Romans 26-yard touchdown pass. Troy Irizarry blasted in from a yard out for the final score.

“Too many mistakes hurt us. You hope to be able to eliminate them because when you do that against a good team you pay the price,” said MC coach Bill Raycraft (3-8). “The game plan was to slow things down, but you can’t do that when you’re behind. We did play hard right to the end which is what you want to see.”