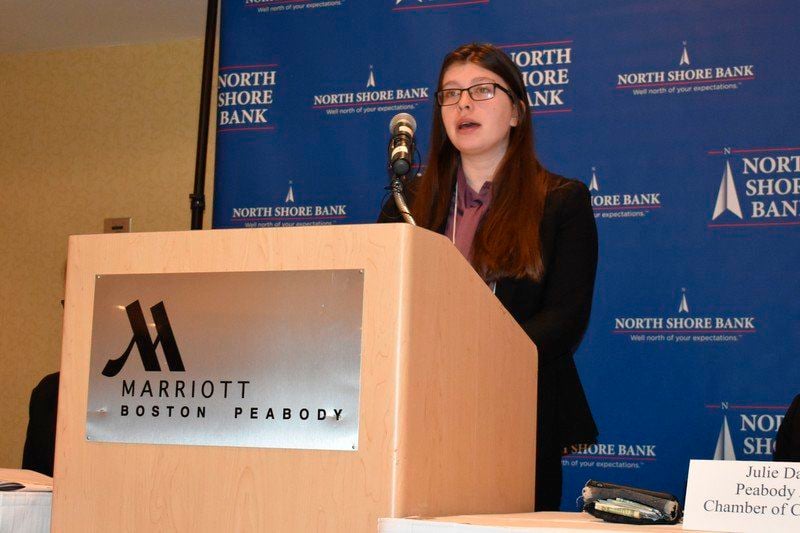 Courtesy photoAlexis Cortes, a senior at Peabody Veterans Memorial High School, speaks about her proposed bill to Congress to explore providing free breakfast and lunch to low-income students across the country, during the Peabody Area Chamber of Commerce's legislative breakfast Tuesday morning. 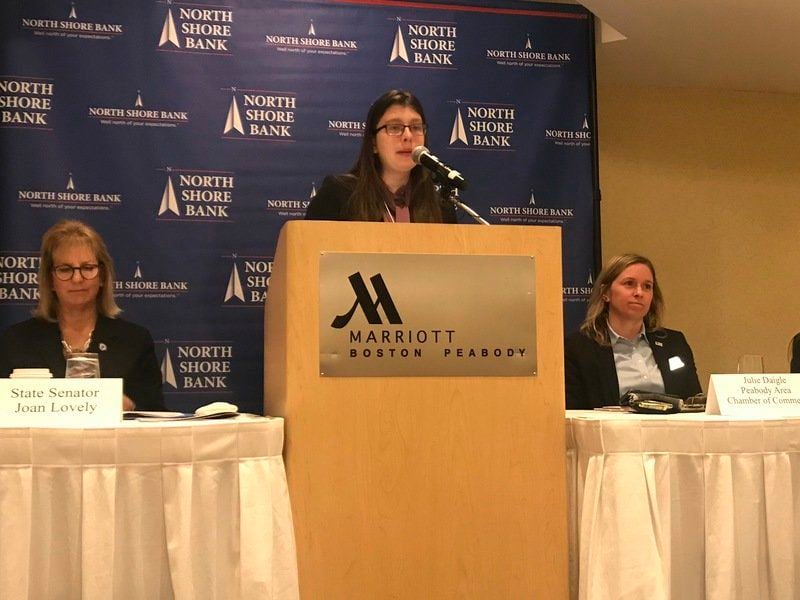 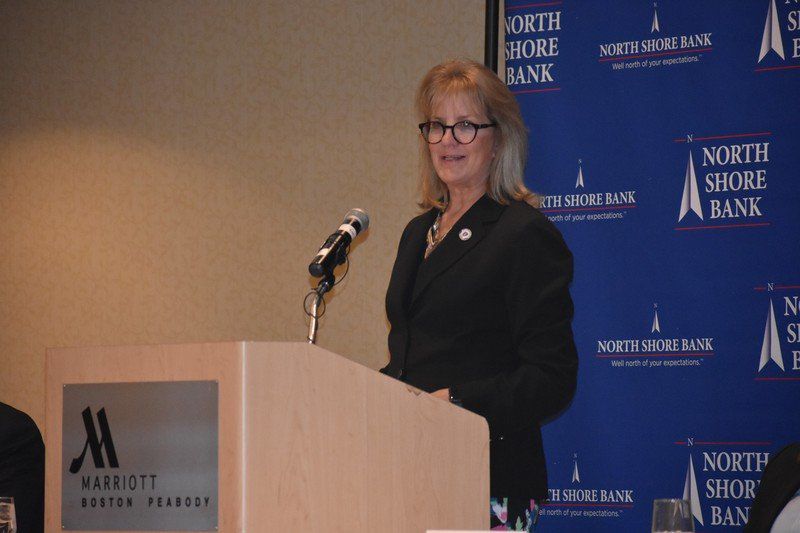 Courtesy photoState Sen. Joan Lovely, speaking during Tuesday's legislative breakfast with the Peabody Area Chamber of Commerce, told Peabody High senior Alexis Cortes she "really did her homework" with her proposed bill to Congress. And, Lovely added, the issue of free meals for students is a timely one. Some officials who spoke that morning pointed to the Trump administration's recent proposals to rollback nutrition standards for school lunches as well as reduce the number of students who are eligible for free meals. 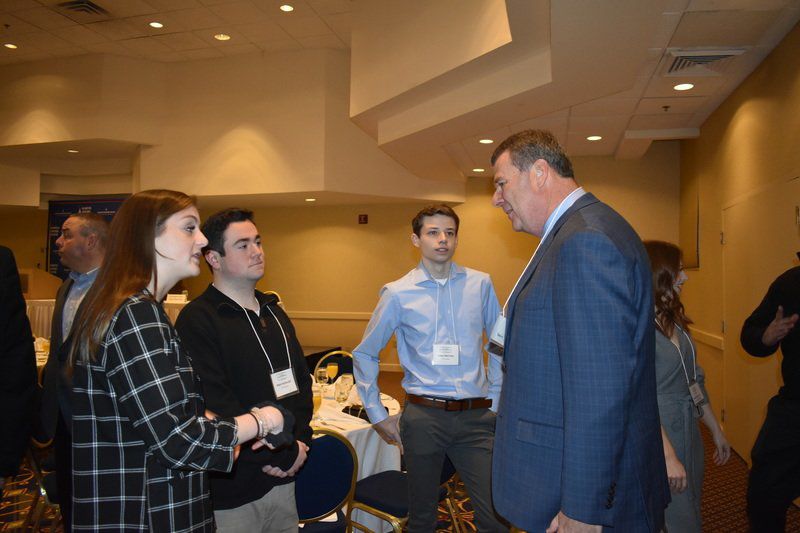 Courtesy photoAlexis Cortes, a senior at Peabody Veterans Memorial High School, speaks about her proposed bill to Congress to explore providing free breakfast and lunch to low-income students across the country, during the Peabody Area Chamber of Commerce's legislative breakfast Tuesday morning.

Courtesy photoState Sen. Joan Lovely, speaking during Tuesday's legislative breakfast with the Peabody Area Chamber of Commerce, told Peabody High senior Alexis Cortes she "really did her homework" with her proposed bill to Congress. And, Lovely added, the issue of free meals for students is a timely one. Some officials who spoke that morning pointed to the Trump administration's recent proposals to rollback nutrition standards for school lunches as well as reduce the number of students who are eligible for free meals.

However, her idea, which grew out of a mock Congress exercise in her AP U.S. Government and Politics class, was applauded by state lawmakers and a representative from the office of U.S. Rep. Seth Moulton, D-Salem, at the Peabody Area Chamber of Commerce legislative breakfast Tuesday morning.

The issues touched a nerve for lawmakers, with some talking about the Trump administration's proposal to weaken nutrition standards for school lunches and another proposal at the federal level to cut the number of people eligible for the Supplemental Nutrition Assistance Program, which could also reduce the number of students that can get free school lunch.

Cortes, a future political science and prelaw major, was among nine students of Ken McCue's AP class to attend the legislative breakfast, and she posed a question to lawmakers the class had prepared for the North Shore delegation.

"The basis of the bill is to provide two free meals per day, every day of the year, for students living below the poverty line," Cortes said. "Another component of the bill involved local industries: Fishing, farming and other natural resources of each state that would be integrated into the meal plan to provide to students with economic disadvantages adequate nutrition."

"I know that the topic of school lunch has been of stark contention especially here in Peabody," she said, "and my question is how feasible would this approach be to provide proper nutrition and support to our local industries, locally or statewide," Cortes said to applause from the ballroom full of business leaders and local officials at the Boston Marriott Peabody.

"I have the bill, thank you," state Sen. Joan Lovely, D-Salem, said, holding up a piece of paper. She had read the bill and hoped it would be submitted to Congress.

"Bills are not easy to write, so you really did your homework, thank you very much," said Lovely, adding that the issue was a timely one. A couple of weeks ago the state Senate passed a bill to make sure that schools with a higher number of low-income students receive breakfast after the start of the school day.

"There are many schools that are doing it," said Lovely, referring to a breakfast program at the Welch Elementary School in Peabody. Salem's elementary schools are also involved in a similar program.

"Children coming into school, if your belly's empty, you can't concentrate, you are not ready to learn," said Lovely, who got to see the Salem meals program firsthand.

A couple of students go to the cafeteria, get a cooler filled with milk, juices, cereals and fresh fruit, and every student gets breakfast so that the program does not differentiate between those who can afford breakfast and those who cannot.

"Nobody knows, and that is what the most important part of this is," Lovely said.

Last week, she said she spoke to a Beverly resident who works for the Massachusetts Farm to School Program, which works to bring local food and food education to schools. Lovely said this program has filed its own bill with the Legislature to create a competitive grant program to allow schools to purchase and prepare locally grown produce and ingredients to both support agriculture and get students proper nutrition.

"The answer is 'yes,' we can do this," Lovely said. "Linking schools and local industries is a great way to provide students with, again, nutritious meals while boosting our local economy." She urged Cortes to submit her bill.

"Your congressman's representative is right here, so get that done," Lovely said, referring to Matt Crescenzo, Moulton's regional director, who was also sitting on the dais with other lawmakers.

"I'm going to start with your question and the answer is 'yes,'" Crescenzo told the gathering. "Study after study has shown overwhelming evidence that strong nutrition standards like school meals help students in the classroom. It is really timely because we actually are sending a letter to USDA Secretary (Sonny) Perdue given that the president has just reversed some of the meal standards, so this is something that Congress is working on."

Crescenzo asked Cortes to find him after the event so he could put her in touch with Moulton's legislative team.

"As Matt said, with the stroke of a pen, they wiped away all the nutrition requirements that local communities can do," he said.

"You're taking that a step further and I think that's fantastic," Walsh said, "Everything has a cost, so you have to figure that out."

"You have a ways to go," Walsh added, "but good for you, and if we could help in any way, we would certainly love to do that."

Cortes said in an interview that her proposed bill would take money from the defense budget and also proposes a wealth tax to pay for it.

The bill also calls for local industries like agricultural products, livestock and fishing to be integrated into providing nutritious meals for students living in poverty.

The idea for Cortes' bill came about during the AP class' mock House of Representatives exercise, which included students being assigned parties, writing bills, taking part in committee markups and debating amendments.

"They all wrote bills," McCue said. Cortes' bill was one that got debated and passed by the class.

There was also some democracy in action when it came to picking who would present Tuesday morning.

"They decided to have Alexis ask about hers," McCue said.